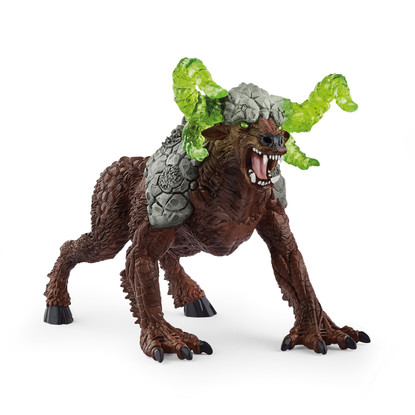 A really tough lump. The Rock Beast from Schleich® Eldrador® Creatures lives in the inaccessible, rugged mountains of the Stone World.

Its front legs have powerful and razor-sharp claws that let it effortlessly scale steep rock walls. Not even the slightest movement escapes its toxic green eyes – which is why every intruder immediately attracts the attention of the dangerous loner.

Once an enemy is discovered, the Rock Beast picks up the chase. If it comes to a fight, the four-legged monster is well equipped: Its neck is covered in strong armor and can withstand any attack, no matter how violent.

But that’s not all – on its head are four horns made of magical crystal that can be the downfall of enemies.

One touch of these sparkling green horns is all it takes to turn the opponent to stone.