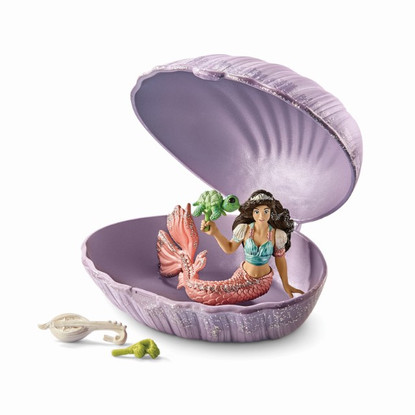 The Schleich figures are modelled with attention to detail, hand-painted with care, and provide educationally valuable playtime.

On an outing to the coral reef, this mermaid found a little turtle that was paddling around totally lost.

She carefully took the animal home with her and has lovingly cared for it ever since.

The two of them quickly became best friends.

The turtle bravely swims through the colourful mermaid house out into the garden and accompanies its best friend everywhere she goes.

Sometimes it swims closely behind the mermaid, her long brown hair tickling its a little turtle nose.

How beautiful the mermaid is with her glistening tail fin and jewellery made of mother of pearl.

When the little turtle is tired from so much swimming, it simply rests on the hand of its friend.

It is quickly rested up and ready for the next outing.

What adventure should the two of them go on next?