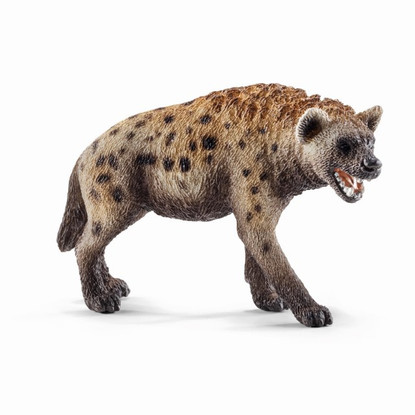 Spotted hyenas might not be the most beautiful predators in the African savannah, but they are certainly the most successful. They live in clans of up to 80 animals and hunt at dawn and at dusk.
On the first glance, spotted hyenas look like oversized dogs. Striking are their long necks, powerful skull, brown spots on a yellowish-brown coat and the sloping topline. This is why hyenas always look as if they ducked. Their appearance helped these predators to their bad reputation. To human observers, they often seem threatening and insidious.
Indeed spotted hyenas are the most successful hunters of the African savannah. At dusk they prey on larger ungulates, but they also do not despise small animals, such as insects or reptiles. Sometimes they also take the prey of other predators, such as lions or leopards. Hyenas eat their prey completely, because they can even digest their bones. Only hairs are regurgitated again. Hyenas live in packs of up to 80 animals, always headed by a dominant female.
SCIENTIFIC FACTS