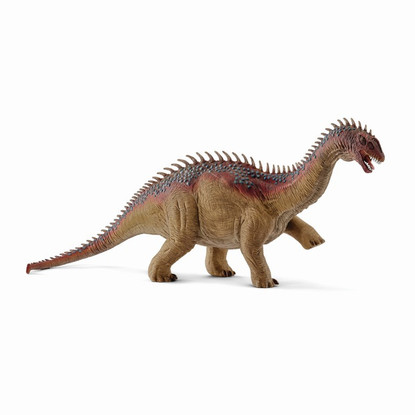 The Barapasaurus was one of the first large herbivores 200-182 million years ago.
Although the dinosaurs were rather small at this time, it reached a length of about 14 meters.
The Barapasaurus not only had a very long neck, but its thigh bones also measured up to 1.7 metres.
This gave it the name "big-legged lizard". Due to its body size and energy requirements, the herbivore had to eat several hundred kilograms of food on a daily basis.
It therefore used its teeth like a rake to gather leaves from the trees.
Because it was not able to chew particularly well with its spoon-shaped teeth, it simply swallowed everything that came between its teeth, whole.
Size: 31 x 6 x 13.8cm (Approx)
Released 2016