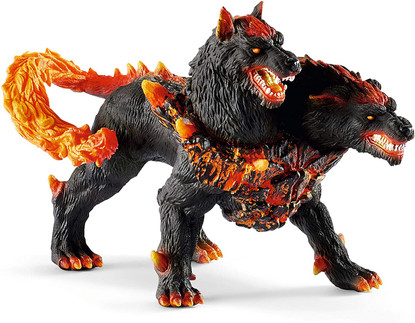 Anyone who wants to enter the lava world must first of all pass the hellhound. And this is easier said than done: with its two heads, its bark is not only deafeningly loud but it can also keep two opponents at bay at the same time. Its tail is a burning whip which it can use to knock out intruders with just one strike. This hellhound is fiendishly fiery!

Beware of the dog: anyone who wants to enter the lava world must first of all pass the hellhound. And this is not so easy. Its bark and growl are not only deafeningly loud, but it also has two heads – meaning it can take on two opponents at the same time! When it starts to wag its tail, intruders should get out of the way fast – in a battle it uses it as a red-hot burning whip! Armour made of hellishly hot magma also provides it with sufficient protection – it is no wonder that the hellhound is not afraid of anyone or anything. Well, there is one thing that makes it lose sleep, and that is the fear that the eternal lava flow will one day dry up...

Made from PVC, hand painted with non-toxic acrylic paints.