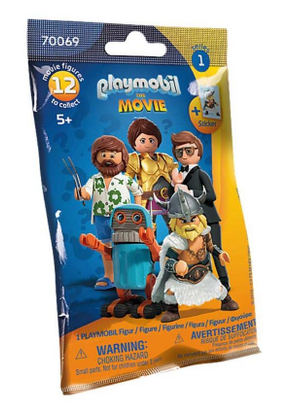 1 Figure in each blind Package!

There are 12 different figures of the Characters from the Playmobil Movie to collect.

Figures are "blind packaged" so you never know which figure you will get.

1 sticker in each pack also.

Sticker books are available in store at Kiozwi Thornbury.

When her younger borther Charlie unexpectedly disappears into the magical, animated universe of PLAYMOBIL®, unprepared Marla must go on a quest of a lifetime to bring him one.  As she sets off on a fantastic journey across stunning new worlds, Marla teams up with some unlikely and heroic new friends - the smooth talking food truck driver Del, the dashing and charismatic secret agent Rex Dasher, a wholehearted missfit Robot, an extravagant fairy-godmother and many more.  Through their vibrant adventure, Marla and Charlie realise that, no matter how life plays out, you can achieve anything when you believe in yourself!