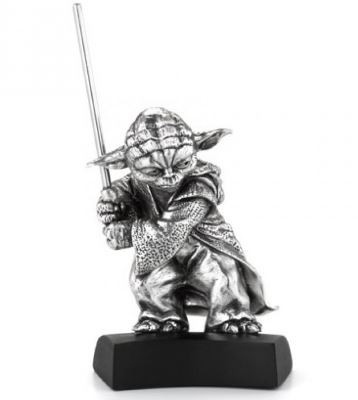 This Yoda figurine in pewter is designed the world reknown Royal Selangor.

This Star Wars Yoda figurine depicts the younger and more agile Yoda with his lightsaber ready for action as seen in Attack of the Clones and Revenge of the Sith.

Yoda is and always will be central to the Star Wars universe and this figurine will make the perfect addition to all collections.

Royal Selangor began in 1885 in Malaysia as a pewter manufacturer and is the largest of it’s type in the world and has a global recognition.

About the Star Wars collection

The May 25, 1977 theatrical debut of Star Wars was destined to change the face of cinema forever. The rousing “space opera” was equal parts fairy tale, western, 1930s serial and special effects extravaganza, with roots in mythologies from cultures around the world. Royal Selangor has teamed up with The Walt Disney Company Southeast Asia to launch a collection that commemorates STAR WARS, one of the most successful movie franchises of all time and worldwide popular culture phenomenon.