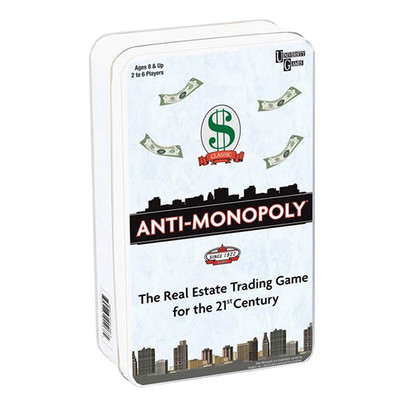 The Real Estate Trading Game for the 21sts Century!

An update of the monopoly folk game invented by Elizabeth Magie 100 years ago.

It's a twist right out of today's headlines: free market competitors clash with ruthless monopoloists.

In Anti-Monopoly, players are divided into competitors and monopolists before the game starts.

The two types of players then follow different rules in their quest for big money.

It is this idea of movement and choice which allows Anto-Monopoly to be the first and only game in history which clearly distinguishes between the actions of competitors and monopolist.